The Hierarchy of Pain 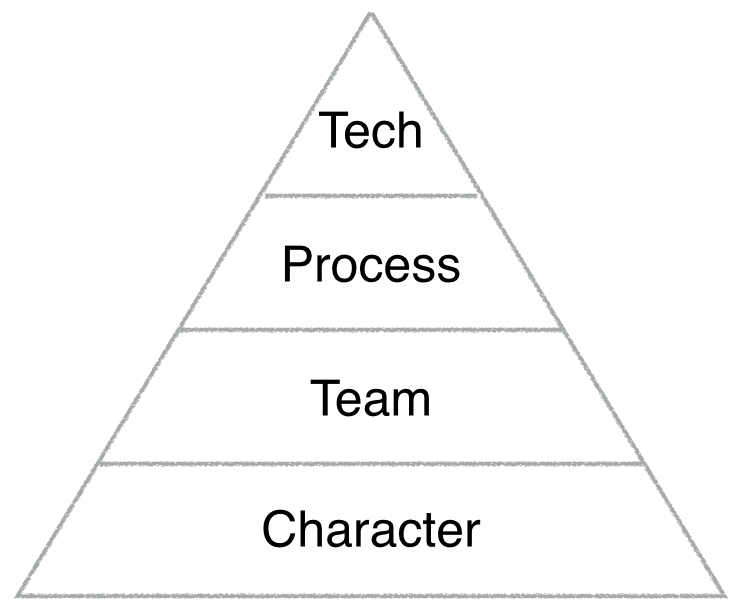 Over the last few years I’ve given talks several times on what I call the “Hierarchy of Pain”. This pyramid describes the pains felt by most large development organizations and provides guidance in how to address them.

The levels of the pyramid

At the base of the pyramid we have Character, this fundamental concept that is talked about in so many business books. Simply put you cannot have a successful team, division, organization or corporation without making sure you have people of trustworthy character filling roles. This segment covers everything from personal work ethic to honesty, and so much more. If you have problems at this level, fix them now. Mentor, coach, discipline or remove whoever the problem is based on your view of how correctable the problem.

Next we encounter Team, the realm of personal human interaction. Team problems can result from an emotional or motivational problem, leadership or direction problems, and personality problems on the team. Most managers have at some point in their career encountered two brilliant developers who simply cannot work together, that is a Team problem.

Process describes all interactions that are codified into rules, be it SCRUM rules, KanBan rules, Waterfall rules, or just “the things we’ve always done”. In larger organizations this also is the realm of culture. If your process doesn’t match your business, or any of a large assortment of other problems, they fall into Process.

Technology finally there is technology problems, those problems which are exclusively the domain of the software and hardware.

How to solve problems

There are two large mistakes that most groups make, and they compound on one another.

But since Fred things this is a Process problem he decides he is going to purchase a large build and deployment automation tool, aka Technology, to correct this problem. But he won’t be successful. Why? Because since the problem is actually a Character issue, there is nothing but a Character solution which it.

When looking at problems within your organization, remember these basic axioms:

I’ll likely talk more about this in future posts, but that is your introduction to the Hierarchy of Pain.